The seed for the idea that laid the foundation for this project began nearly a decade ago and involved an ad hoc data collection effort which led the largest known compilation of “feeling” words in the world (nearly 4000 descriptors). Although this was only undertaken as an acid test for the approach, these feelings have now been roughly sorted, organized and matched with accompanying definitions. Despite the substantial breadth encompassed by these descriptors, the process resulted in a surprisingly coherent taxonomy of well over 100 discrete sets of feelings that describe the states of various dimensions of well-being across five domains (i.e., physiological, self, social, planning, and acting). Additionally, this initial taxonomy reveals that deficit states in each of these dimensions of well-being appear to be directly linked to four universally-evoked emotions (i.e., fear, happiness, sadness, and anger). Hedonics are tied to the state of these dimensions and when deficits exist in any of these dimensions, needs emerge (to achieve homeostasis), attention is focused and behaviors are influenced (see below).

The nature of this initial structure can be described as follow - when one is confronted with nearly 4000 words that are commonly used to describe human feelings and emotions and then attempts to organize them into categories, it quickly because obvious that much of our affective vocabulary consists of language that describes the state of various dimensions of well-being. The diagram below illustrates how this is manifested in language. In the first instance, the status of our need for food/nourishment is articulated along a continuum that begins with “not hungry” at one extreme and very hungry, starving, ravenous and famished at the other extreme (with peckish and somewhat hungry shown in between and representing a middle state). 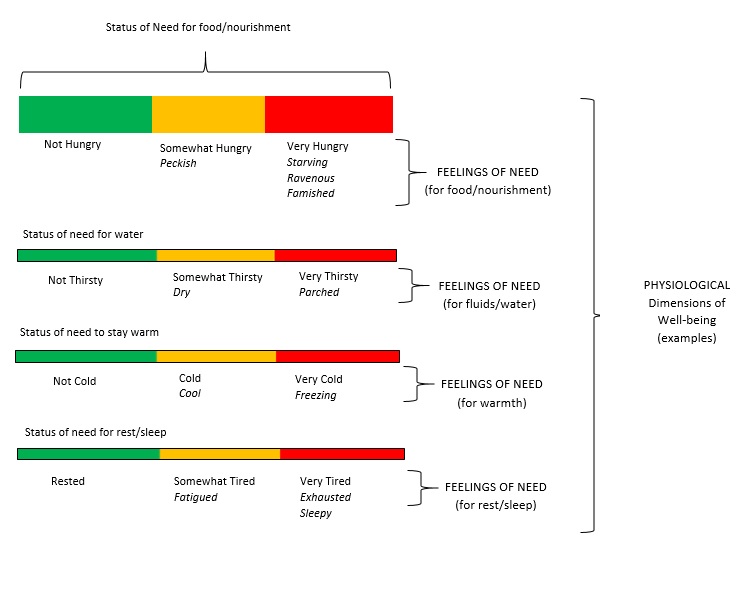 Note that these independent dimensions of well-being have been crudely demarcated with three colors (i.e., green for no need, amber for some need, and red for extreme need) simply to help illustrate the escalating nature of the need being represented by the feeling words shown along the continuums that are described in each of these categories.

As these types of feeling words are assembled into independent dimensions of well-being, and then further grouped into broader categories, they fall roughly into five major domains (i.e., physiological, self, social, planning, and acting) – see below.

**Note that this is a high level view of the framework; each of the individual dimensions of well-being
in each of these categories contains many underlying feeling words.

When considering the many independent dimensions of well-being that are described in the taxonomy above, it becomes clear that the comfort zone in each of these dimensions can vary considerably between individuals. But the fact that we have language to support extreme states of deficit within all of these individual categories of well-being is particularly useful, since a deficit state in any one of these dimensions (i.e., one that is outside of an individual’s comfort zone) appears to be linked directly to four emotions – as follows:

Fear- Anxiousness (mild state) and fear (extreme state) occur when there is a conscious or unconscious anticipation that one of these individual dimensions is going to end up in a state of deficit that is outside of the individuals comfort zone.

Happiness- Occurs when one or more of the individual dimensions that was/were tending towards a state of deficit and/or in a state of deficit and outside of an individual’s comfort zone is/are altered such that the resulting need(s) has/have been met; or when anxiety or fear that existed is alleviated or extinguished or eliminated (due to a change in understanding or circumstances).

Given that all of these individual dimensions of well-being appear to be acting in a manner that is largely independent (of one another) and given that all are in various states at any given point in time, it should be noted that mixed emotions are fully anticipated in this initial framework.

Furthermore, each of these categories of well-being appear to be equally important. Any of them can be the primary drivers of motivation and behaviour at any given point in time if they are in deficit (i.e., outside of an individual’s comfort zone).In other words, the four emotions that are mentioned above appear to operate on an interrupt-driven, priority basis. That is to say that the dimensions of well-being that are in the greatest state of deficit appear to be given priority.

Other Types of Feelings

Words that relate to moods are different again, and speak mainly to the persistence and/or changing nature of the four emotions noted above.

Together, these various unique categories of feelings help us to clarify the nature of affective experience considerably, but it needs to be emphasized that the rough taxonomy that has been presented here is currently incomplete and unpublished work. Computational linguistics research will be incorporated into this project to expand the framework further so the final product should be a considerable expansion on this rough initial framework.

This linguistic starting for the Human Affectome Project is intended to be aligned with Gordon Allport's statement that psychology should reflect, "the wisdom of common experience". Although the underlying neurobiology may not adhere to the same structure, there are so many descriptors of feelings and emotion that when they are organized into groups of like kind, the similarities of items of like kind (and the broader categories to which they belong), is much more easily discerned. This is something that was not possible in the past, so the framework should help us find an intuitive basis for agreement on fundamental terminology and vocabulary. It also promises to reveal a greater number of variables (and more distinctive relationships between variables) than we have ever had in any previous model.

Additionally, a comparative analysis will be crucial in this project since the function of the various components within the central nervous system are equally important and will need to be reviewed and fully reconciled with this framework. In other words, language will serve as our starting point, but the comprehensive functional model that will be developed will be carefully tied to what we know about the underlying neurobiology. As such, the reviews that are planned and the resulting synthesis will be clearly grounded in the neuroscience literature and the resulting work will be published in a peer-reviewed neuroscience journal.

It should also be noted that the linguistic starting point for this project is based on English language descriptors which is an approach that has limitations. First of all, even though a substantial number of feeling words were used to create this initial framework, this may not represent all of the feeling words that exist in the English language. Accordingly, The Human Affectome project will also incorporate the efforts of research specialists who are working in automatic or computer-aided analysis of large bodies of naturally-occurring language (“corpora’) to help extend the framework. These terms will then be used to identify universal affective constructs that will be validated by linguistics researchers across several languages.

It would obviously be a leap to assume that a linguistic model will be fully in alignment with the mechanistic underpinnings of affect within the central nervous system. Indeed, this is the essence of the arguments made by Ortony and Turner5 and of those more recently marshalled by Feldman-Barrett et al6,7. So although a linguistics-based functional model might be useful to help us find common ground on definitions and terminology, a truly robust model will only emerge if it can also be reconciled with the neuroscience literature.

For example, Panksepp has argued thatcross-species affective neuroscience studies confirm that primary-process emotional feelings are organized within primitive subcortical regions of the brain that are anatomically, neurochemically, and functionally homologous in all mammals that have been studied1. So when each of the areas that are described within the model are reviewed, this experientially reported taxonomy will be compared with the state of the evidence that exists in the neuroscience literature and it will also include a review of the research that has been done on other mammalian species. This approach will ensure that any evolutionarily conserved biology that is relevant is identified and recognized as part of the project.This should allow the task force to speak authoritatively on the topic of emotions as natural kinds when the final synthesis is produced.

This detail will be captured in a series of reviews in the following areas:

These reviews will not only allow us to validate the structure of the refined linguistic model that emerges at the beginning of the project, but it will also allow us to objectively weigh-in and offer a state-of-the-science report on the evidence that exists to support the two opposing positions that have been staked in the latest incarnation of "The hundred-year emotion war"5. Individual teams will take on each review and an "all-author" synthesis will result in a capstone paper that will draw on the work of all of the teams.

All researchers on the taskforce should therefore emerge with two contributing authorships (i.e., a team review and as a contributor to the synthesis paper) in a high-impact journal.